The hotel we stayed in our first night in Brazil was the Hotel Ideal. It’s a no-frills hotel that was quite inexpensive, provided a good breakfast, and had decent rooms. Our room didn’t have air conditioning, but I was tired enough that it didn’t matter.

We met the McCrackens for the continental breakfast the hotel provides. It included eggs, fresh bread, fresh fruit, excellent coffee, and juices I had never experienced before. It was delicious! We then headed out to explore the area for a while. Tom and Jean lead the way to the waterfront where we got our first look at the Rio Negro. Not far from this location, it flows into the Amazon. We wouldn’t get to see the Amazon until we flew over it that evening.

We also took the time to explore a fruit market, which was also pretty awesome. I had never seen so many bananas in my life! After a couple of hours walking the area, we headed back to the hotel to nap before we had to go to the airport to catch our flights to Itaituba.

The McCrackens had told us at breakfast that we would likely be going straight from the airport in Itaituba to the closing ceremony of an event the churches had put on during Carnaval. We weren’t sure what it would be like, but figured we needed to rest a bit.

Flying Over the Amazon

The flights to Itaituba were uneventful. We flew Azul, which is a domestic airline. We were on a commuter sized turbo-prop that made a stopover in Santarem before going on to Itaituba. We were treated to some awesome views of the jungle below us, and of the Amazon. It was amazing to see just how flooded everything was in the rainy season.

When we arrived in Itaituba, we were greeted by Oreste and Marlene Greiner and by Jefferson and Richele. The Greiners are church leaders in Itaituba, and Jefferson and Richele are a married couple that have been through the seminary at Boa Terra and are serving at Maloquinha. They loaded our luggage (which was more than I was proud of) into the VW van (called a combi), and we headed into downtown Itaituba for the closing ceremony.

I had been expecting something along the lines of a big church service, or “Last Day of VBS” celebration. What I was not expecting, was closed off streets with a big concert going on. There were hundreds (and probably thousands) of people enjoying the beautiful evening and worshiping God. It was a celebration of the community events and services that had been held during Carnival. We found out later that throughout the event, more than 200 people had accepted Christ. 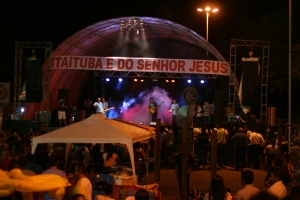 A View of the Stage

Beth and I couldn’t understand any of the lyrics, but it was a joyful and festive event. People from congregations all over the area had traveled to Itaituba to join the celebration. We were introduced to a large number of people, but I only remembered a handful of names. I’m thankful that we got the opportunity to meet many of them again later in the trip so that we could get to know them a bit more.

One of the things I hadn’t really thought about is that it isn’t common in most of Latin America for men to have beards. I’m used to it drawing the occasional look, but it was more than occasional in Brazil. One of the first people I met was Mauricio. His father, Daniel, is the head of the seminary in Itaituba, and we would end up spending quite a bit of time with him. For the first two weeks we were there, he would start stroking his chin as soon as he saw me. I think we became beard buddies!

After an hour or so at the celebration, we went with a big group to get supper and then we headed to Maloquinha. As excited as I was for supper, I was most excited to get to Maloquinha so I could go to bed. After two days of traveling, I was about ready to collapse. It was awesome to see how God is moving in Itaituba, and I couldn’t wait to see what else He is doing there!