by jonathanbtodd on September 21, 2016 in Missions Updates • 3 Comments

As of today, we have been in Brazil for two full weeks. I have been reflecting over our last 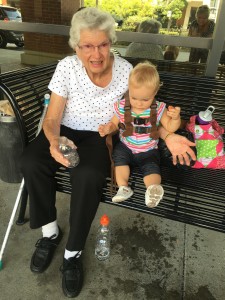 Miriam sitting at the airport with her great-grandmother, Nanny, as we unload our luggage from the car. This is the moment Miriam learned to open a water bottle, hence the puddle underneath her!

month with all of the busyness of preparing to move, saying goodbye to friends and family, and finally getting on the airplane. For all of the things we had made arrangements for ahead of time, there was so much more that we just didn’t know. We knew that traveling would be stressful, and I was praying for God to keep our stress low. I also was worried because I knew that in our first day or two, we needed to accomplish several major things: find a place to buy groceries; find a place to change our US dollars to Brazilian Realis; make arrangements for childcare for Miriam while we attend language classes; get in contact with our families to let them know we had arrived; and learn our way around our area of town since we would be walking everywhere. On the way to the airport, I was talking with my dad. We discussed that there are so many times in ministry and in life that you just have to give your concerns to God and trust in the path He has set before you.  We said our prayers, and got on the plane.

We are on the plane ready to fly to Brazil!

Flights with toddlers are always stressful, but Miriam did amazingly well! As we were first settling into our seats for our long flight, I struck up a conversation with the man beside me. I learned that he’s a pastor from Florida, but he’s actually from Northern Brazil. He’s been involved in a church plant in Southern Brazil, and he gave me some wonderful insights into the area where we would be going.

Once our flight landed, we were in for some other nice surprises.  We learned that many places in Brazil have special lines specifically for parents with young children. So, instead of standing in an immigration line with 100 other people, there were only two couples in front of us!

We have all of our luggage!!!!

When we made it to baggage claim, an airport employee had already gathered all of our luggage and stacked it on two carts. Another employee came over and offered to help us carry our luggage out. He and a coworker even talked to the customs officials for us, and we were waved right through. Instead of the 90+ minutes we had expected to spend clearing immigration and customs, it took only about 30 minutes!

Pierre, the director of our language school, had made arrangements for a van to pick us up and drive us the 90 minutes into Campinas, the town in which we now live. Pierre met us at the language school, and took us to the house we are renting to show us around and to help us unload our luggage. He had even bought some groceries for us so Miriam would have some snacks.  He then took us on a walking tour of the local grocery store, Lojas Americanas (their version of Dollar General), and the bank to get Brazilian currency. When we got back to the house, a fellow missionary attending the language school was waiting for us with a bag full of lunch! We were so thankful not to have to immediately go grocery shopping so we could eat! 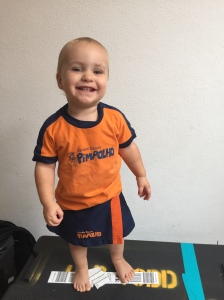 Miriam in her new school uniform

After lunch, Pierre took as to a local preschool that not only had an opening for Miriam in the morning, but is located directly across the street from us. As of today, Miriam is going there four hours every morning and we have been able to start language classes.

Throughout the 20 hours of travel, God continually put people in our path not only to guide us, but to make travel just a little bit easier. God took every worry we had for our first days in Brazil and showed us that He is truly in control and that He will care for His children. We look forward to the wonderful Brazilian surprises God has in store!

We are still in need of some financial partners. If you are interested in partnering with us, click on the image to go to a giving page. Alternately, you can contact Debbie Taylor at 1-800-848-2464. We are Project# 42.10039.

← Good News, Everyone!
Some Favorite Recipes →

One thought on “Our First 24 Hours”